The following text provides detailed information about various aspects of Manuscript preparation for submitting to JIRSD.

Authors must indicate the Manuscript Category under which they are submitting their manuscripts. All manuscripts (except those submitted under Book Review, Correspondence and News category) should have a brief introduction. The text should be intelligible to readers in different disciplines and technical terms should be defined. The text may be broken into sub-headings.

Figures (graphs, charts etc.) should be neatly prepared and placed within the text. Note that each figure will be considered equivalent to 250 words. The figures should be numbered in a chronological order using numbers (1, 2, 3 and so on) in the order of their appearance in the text. Each figure should have a suitable caption and the caption must be placed below the figure.

The text should include a reference to respective Figures else the Figures will be removed. E.g.

Tables should be neatly prepared in a word processing software (e.g Microsoft Word, OpenOffice) and placed with the text. Note that each table will be considered equivalent to 250 words. Tables should be numbered in chronological order using numbers (1, 2, 3 and so on) in the order of their appearance in the text. Each table should have a suitable caption and the caption must be placed above the table.

The text should include a reference to respective Tables else the Tables will be removed. E.g.

There is much variation in state-wise population of India (Table 1).

How to Cite Research Papers:

How to Cite Books:

i.e. Surname, Initials of Firs Name of Author. (Year of Publication). Name of the Book. Name of the Publisher, Place and Country where Publisher is Located.

For seeking How to Cite help about other materials, please consult with the Editor (editor@jirsd.upub.in).

Authors must acknowledge the persons, mentors, institutes and organizations that have provided academic and financial support for their work. Any other conflict of interest must be declared while submitting the manuscripts.

JIRSD is published under the Creative Commons Attribution-NonCommercial 4.0 International License. All publications in the JIRSD are Open Access and will always remain freely downloadable for all users. Authors retain the copyright to their publications under the aforementioned license’s terms and conditions.

The jurisdiction for all disputes concerning articles submitted to JIRSD and published material will be at courts/ tribunals situated in NCT of Delhi (India) only. 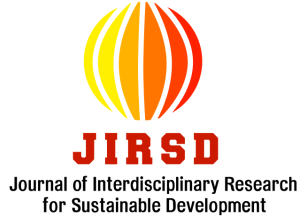 Journal of Interdisciplinary Research for Sustainable Development is licensed under the Creative Commons
Attribution-ShareAlike 4.0
International License.

JIRSD has been set up as a platform for researchers from all disciplines and practitioners of sustainable development to publish their work and help build capacity so that research can help solve global challenges.
[Read More]

The Journal of Interdisciplinary Research for Sustainable Development (JIRSD) allows readers to freely read, download, copy (after giving appropriate credit), distribute, print, search or link to the full texts of its articles and to use them for any lawful purpose.